Our Planet, Our Health

Our Planet, Our Health

“There is almost no health condition that will not be affected by the climate crisis we are facing, so it’s hard to over-emphasise just how fundamental this problem is. It’s going to affect every aspect of health care”
– Dr Rob Phair, President, Rural Doctors Association of Victoria

Climate change is a health issue

Today is World Health Day and this year the World Health Organisation (WHO) is placing a spotlight on the health of our planet, and the widespread impact it has on our health and well-being.

Global year on year temperatures have been increasing, as this videographic data from NASA shows:

The UN has recently confirmed Australia has warmed faster than other parts of the world, and that:

WHO estimates that over 13 million people each year lose their lives as a result of avoidable environmental causes (WHO, 2022).

Health effects of temperature can include:

The latest report from the Intergovernmental Panel on Climate Change highlights an ongoing link between carbon emissions and the health of Victorians and Australians more broadly.

This extends to include a greater frequency of bushfires and floods, like the ones seen most recently in South East QLD and Northern NSW.

Climate change is also having real-world impacts on our mental health. Regarding climate change, Victorians feel:

Young people in particular are feeling anxious and frustrated about climate change: 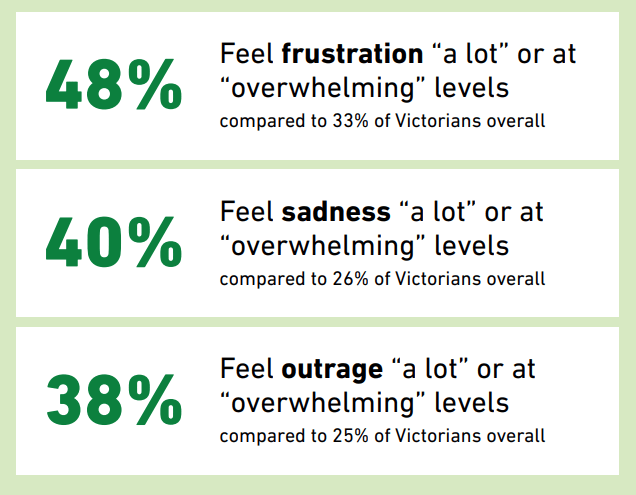 This ‘eco-anxiety’ is particularly prevalent in younger populations, who potentially have the most to lose:

Where to from here?

As the world races to reduce global carbon emissions we have seen states and territories across Australia set their own targets to achieve net zero emissions. The Victorian government set a target to reduce emissions by 45%-50% before 2030 (Victorian Government, 2022), in accordance with the state’s Climate Change Act (2017).

Under the Act, the Victorian Government has also released a series of 5-year action plans that cover seven different sectors to integrate and address climate change across its departments and their programs.

Health Issues Centre has endorsed in particular the actions relating to:

Federally, the Labor opposition has pledged to develop Australia’s first ‘National Strategy on Climate Change and Health,’ to address the health impacts of climate change.

HIC supports further investment to help minimise the amount our climate changes as much as possible, and to support our health system be ready.

Being ready means a health system able to cope with the increased hospitalisations and dealing with inequitable impacts of climate change.

We also support the Healthy Homes for Renters campaign, a national movement advocating for reforms on energy efficiency and insulation standards in Australia. This campaign has been making a push to combat the effects of rising temperatures across the country and address some of the health risks associated with climate change.

Our team will also continue to amplify the voices of Victorians working to achieve change on climate action and advocate for government support in dealing with its health consequences – both in the immediate term and on our future generations.